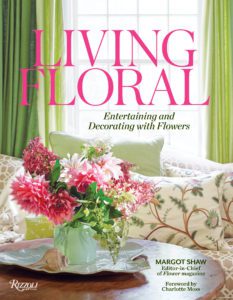 BY CATHERINE BALLMAN – Margot Shaw has an eye for living and decorating with flowers and it shows in her magazine Flower. She also has an eye for opportunities. Ms. Shaw recognized the need for flower-oriented publication to fill a niche between popular and professional magazines. On a recent blog on Design Chic, she noted that House Beautiful would have a page or two of floral ideas, and those who had trade magazines were of little value to the non-professional. She filled the void with “Flower”, a luxury lifestyle magazine and brand.

She will speak about the magazine’s inspiration and creations on Wednesday March 3rd at 2pm at the Boca Grande Garden Club. The meeting takes place outdoors in the community center.

A one-year subscription to Flower is a 2021 club membership perk. Now members can learn the backstory.

Shaw started in 2008, the moment the economy was in chaos and the digital world was making print journalism a huge drag. Still she persisted. Thirteen years later, she has built up a circulation of 375,000 readers for her magazine, which is described as “stylish, refined, cultured and curious”.

She is quick to comment that she was lucky enough to be at a US magazine publishing center. Birmingham, Ala., Is the surprising home of nearly two dozen popular national magazines, including Food & Wine, Country Living, and Veranda. The talent pool she could dive into was deep and wide, full of specialist knowledge on both the editorial and journalistic side of the house.

From the publisher’s half, Shaw was asked to write a book about what she calls the “floral lifestyle.”

“In my experience,” she said, “the floral lifestyle has a lot to do with noticing natural beauty and incorporating it into my life. A few die-hard camellias might be gathered in February and floated in a silver Revere bowl, or lots of greens can be used in an interior or party palette. It’s about nature in general and flowers in particular, somewhere in my aesthetic. “

As with any other busy professional, she had neither time nor material. Until she did. She realized that she had a story to tell and could find the time. Living Floral (2019, Rizzoli) is the happy result.

Reader reviews call the book “elegant” and say that it “brings happiness”. An enthusiastic thumbs up warned readers not to “just buy one” because this is a nice gift. Signed copies of the book, which include an annual subscription to Flower, can be purchased from Flowermagshop.com.

The meeting is organized in such a way that the participants can be socially distant. According to our way of life in 2021, only members are invited to the events. The Wednesday presentation will be recorded and published on the club website bocagardenclub.com.

Marcy Shortuse is the editor of the Boca Beacon and has been with the newspaper since 2007. She is also the editor of Boca Beacon’s sister publication, Gasparilla Magazine. She has over 20 years of experience writing and editing local newspapers and is originally from the Chicago area.