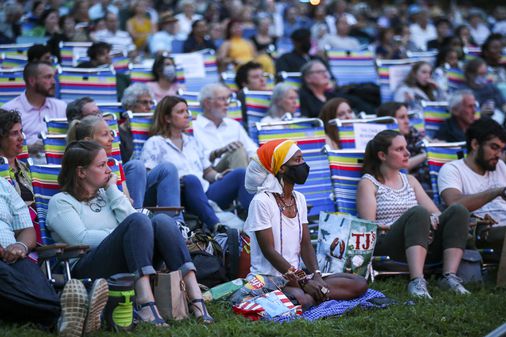 The story is symbolic of the summer of 2021.

Since concerns about the Delta variant overshadowed the “hot Vax summer” that was devised by many months ago, organizers of large outdoor events are reacting differently to the increasing number of cases. While some have abolished COVID-19 protocols – referring to guidelines from state and local authorities – others are enacting stricter rules to reduce the likelihood of spread.

Fenway doesn’t require masks, but the venue strongly recommends them for unvaccinated visitors, a spokeswoman said.

“We remain vigilant and keep an eye on the latest developments related to COVID-19,” said Zineb Curran, vice president of corporate communications for the Red Sox, in an email. “The safety of our fans and guests is our top priority and we plan to adjust accordingly should public health officials make new recommendations for the City of Boston.”

Shakespeare on the Common has since reduced its capacity to about 2,000 people and drew white lines on the grass to suggest a distance of 3 feet between groups. Participants were also asked to put on masks when moving around the seating area.

“Unvaccinated people should follow the latest CDC guidelines and wear a mask at all times,” it says on its website.

Although during a performance on Saturday evening the gaps between the participants ebbed and flowed; some huddled close together at the front while others sat further back to take advantage of the extra space. Some wore masks.

Tanglewood, the Boston Symphony Orchestra’s summer concert venue in the Berkshires, is also cutting its 18,000-person capacity in half to create distance between groups and advising unvaccinated participants to mask themselves, according to Bernadette Horgan, a spokeswoman.

The Lowell Summer Music Series, which began on July 30, retained its full capacity of more than 1,800 people, but requested concert-goers to wear a mask if they were not vaccinated or unable to keep their distance from other groups (the organizers gave no measurement). These rules are in line with federal regulations, said organizer Peter Aucella, as the festival’s home, Boarding House Park in downtown Lowell, is owned by the National Parks Service.

Nevertheless, photos of the event showed unmasked spectators sitting at arm’s length from each other.

“I almost expected to see more distance than we actually saw,” said Aucella. But “everyone in the venue seemed very comfortable.”

Throughout the pandemic, nature has been viewed as a safe haven where COVID-19 is far less likely to spread. That’s still true, experts say, but the delta variant has led them to at least rethink the prevailing wisdom a little.

Dr. Timothy Lahey, an infectious disease doctor at the University of Vermont Medical Center, cited several examples last month where infected people appeared to have transmitted the virus outdoors, such as at a wedding in Texas this spring.

“It’s soon enough that we don’t know for sure, so I don’t think it’s time to hang up Crpe and make morbid conclusions,” Lahey said in a phone interview. “But I think it’s time for a break and time to think about where you are putting those safety lines.”

The level of risk outdoors depends on what you do, Lahey said.

On the Delta variant, having a few vaccinated friends throwing a flying disc outside is still next to no risk, but a huge gathering like Lollapalooza – the Chicago music festival that recently caused rage on social media for it Got hundreds of thousands of exposed people in a corner, albeit in the open air, setting – could increase the chances of transmission.

“The risk is probably not as small as we once thought,” said Lahey when he was outdoors in a large crowd.

The return of concerts to Fenway last week began on Tuesday with Guns N ‘Roses, continued on Wednesday with Billy Joel and Thursday with Green Day, and was crowned with the Zac Brown Band on Sunday evening.

Chris Henrique, 37, of Fall River, who said he was vaccinated, felt comfortable enough to keep his mask in his pocket as he enjoyed Billy Joel’s Fenway gig with some friends last week. Henrique said most of the people at the concert did not wear masks.

As he makes decisions about what he thinks is safe and what isn’t, Henrique says that he weighs his desire to protect those around him against his confidence in the vaccines’ effectiveness.

“If a bunch of people sneeze around me, I turn this thing on just to be safe,” he said in a telephone interview.

Others, on the other hand, don’t feel as comfortable performing outdoors.

John Stoideck, 69, from Groton, and a companion ventured out on a sultry Saturday night to see Shakespeare on the Common behind a mask and a few yards from the nearest group.

“I think that’s the sure thing,” he said shortly before the performance began.

The piece was Stoideck’s first live appearance since the pandemic began, but just because he went to an open air show doesn’t mean he would be attending an indoor show.

“We’re probably overly cautious compared to the people around us,” said Stoideck, pointing to the thousands of other viewers, all but a handful of whom were exposed, “but that’s fine with us.”

The safety precautions a person takes at a large gathering should depend on what preventive measures have already been taken, said Dr. Jose R. Mercado, Assistant Professor at the Geisel School of Medicine, Dartmouth.

When asked if he would wear a mask at an outdoor gathering with more than 50 people, Mercado answered yes.

“If I didn’t know all the variables,” said Mercado, “I would protect myself.”

One preventive measure that is gaining momentum across the country is requiring event attendees to provide evidence of their vaccination status. But the strategy has received mixed response from officials, some of whom are reluctant to swing a stick instead of a carrot to encourage vaccination. In Boston last week, incumbent Mayor Kim Janey declined to have gyms and other businesses checked to see if customers were vaccinated.

In Lowell, Aucello said organizers checking vaccination status would affect their ability to host an event.

“We have a certain number of staff to organize a show and they are not medical staff but event staff,” said Aucello.

“If it becomes a requirement, we will do our best,” he added. “I just can’t imagine the organization.”

For Lahey and Mercado, however, a fully vaccinated audience makes any event much safer.

“For people who have been vaccinated, it makes perfect sense to reconsider some of the transmission-prevention measures we thought we had a few months ago,” said Lahey. “But really, the greatest risk is unvaccinated people.”

Jack Lyons can be reached at [email protected]